Three small personal updates in the wake of Orlando 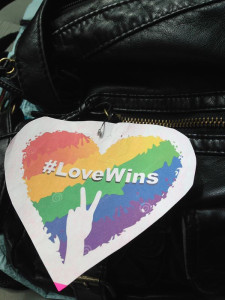 What I pinned to my purse this week. Almost literally the very least I could do, but I couldn't not do it.

A cross-post from my Tumblr:

I’d like to share with you how our youngest child learned and dealt with the shocking, traumatizing truth that same-sex couples can marry in the U.S.:

(In case you wanted very anecdotal evidence that homophobia is learned, not inborn.)

That's part of a message I got today from a young woman I've never met, but with whom I've exchanged several emails about writing and publishing--and, occasionally, LGBT issues. Look, I'm a boring, straight, stay-at-home mom who writes about fictional people, some of whom are LGBT, because I like all kinds of love stories. But I consider myself practically a poser; or at least, not really someone who's putting near as much effort as she could into being the good ally I'd like to be. So what kind of world are we living in where someone as half-assed about LGBT kindness as me is getting thanked for being someone who's safe to send a message to about such issues? It breaks my freaking heart. We've come a long way, but we have a still longer way to go yet.

If you're an ally too, and you haven't said so, say so. Pin a rainbow heart on your jacket. Chances are, someone out there is going to feel comforted when they see it. Even if they aren't feeling up to saying anything.