While (badly) playing songs on piano tonight from my book of Christmas sheet music, I found myself amused, as I am every year, by the repeated insistence on figgy pudding in "We Wish You a Merry Christmas." I mean, it's the subject of three of the four verses. So I tweeted about that, and got an even more amusing response out of the blue within minutes. 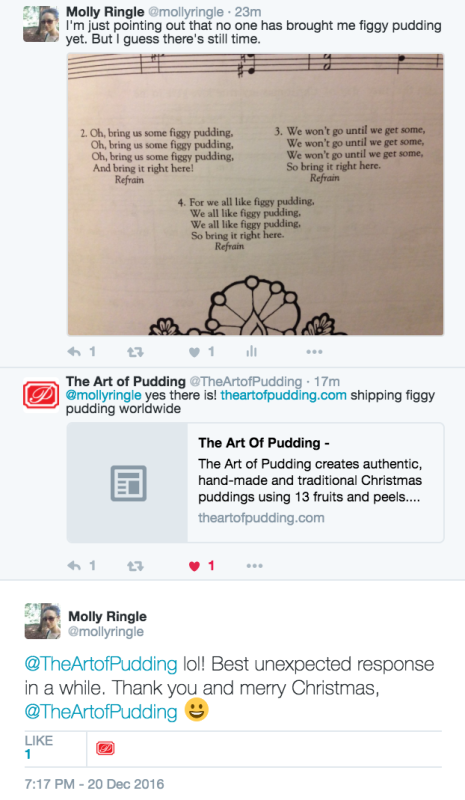 Speaking of holiday carols: as someone slightly more inclined toward paganism than Christianity (though I have a Christmas tree in the house and Christmas music and all that--I count as a "cultural Christian" when it comes to some of the holidays), I have to tip the hat every year to "Deck the Halls," which is possibly the only popular carol that doesn't reference Christmas or Jesus anywhere in it. It's all about Yuletide and greenery and harps and gay apparel and fa-la-la-la-la-la-la-la-la. Also it's ridiculously cheerful.

So, I wish you a merry Christmas, a happy new year, a joyous Yule, a happy Hanukkah, and good times in whatever else you might be up to at the end of this calendar year. And of course I really hope you get figgy pudding. If that's actually any good. I'm not sure I've tried it, to be honest.